Drag and Drop Table for 1 vs 1 comparisons added further down this page.

Click here to jump to the Quick Compare Great option for 📱 phone users.

Click here to jump to the Quick Compare It will save you time comparing.

Uptime & Server Response Time info: NEW!! Monitored Dates (of IPs and known sites of provider) Oct 19, 2016 – Nov 18, 2016 via UptimeRobot. Server Response Times US (W=West Coast) US (E=East Coast) via BitCatcha.
Free domain info: Some of these hosts only provide a free domain with an annual plan.
Host Gator Migration Info: A limited number of free transfers from other hosting providers, or inter-server transfers between HostGator servers for new accounts within 30 days of signup.
Money Back Guarantee Info: Free domain registrations will not be able to be refunded if you choose to take the money back guarantee. So the value that the host assigns to the domain registration will be deducted from your refund. This amount usually ranges $7-$15.

Server Response Time (All those under 60 ms for the Eastern United States):

Server Response Time (All those under 60 ms for the Western United States):

Free Migration(Those that provide it for free):

(*This feature does not affect total score because you either need Linux or Windows – Most people will need Linux as it is the default):

Advertising Credits (Those that provide them)

(*This feature does not affect total score because credits are only available if you have never used the credit providers):

(For features that count towards total the score)

Liquid Web recently acquired WiredTree which was an awesome host. Liquid Web has been an absolute nightmare. The migration took over a month and was a huge cluster @#&*. With any competent host a migration will take a single day and propagation lasts 72 hours. Their Heroic Support is anything but heroic! I’ve been on hold over 20 minutes and just hung up. I’ve had tickets sitting in their ticket system for 2 days that go completely ignored. STAY AWAY FROM LIQUID WEB. If your site goes down they simply do not care like they use to in the past. 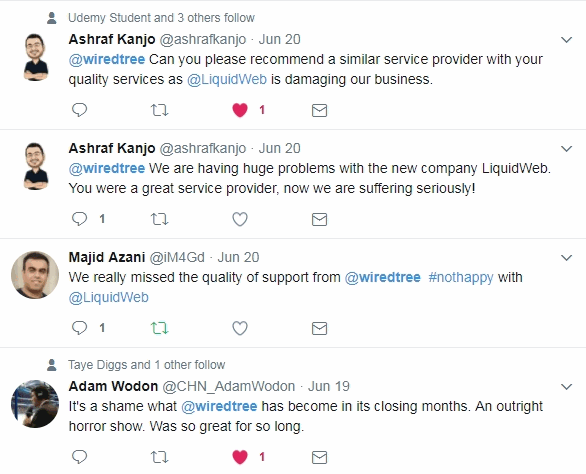 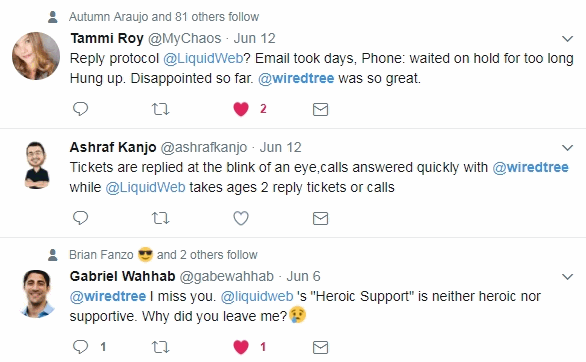 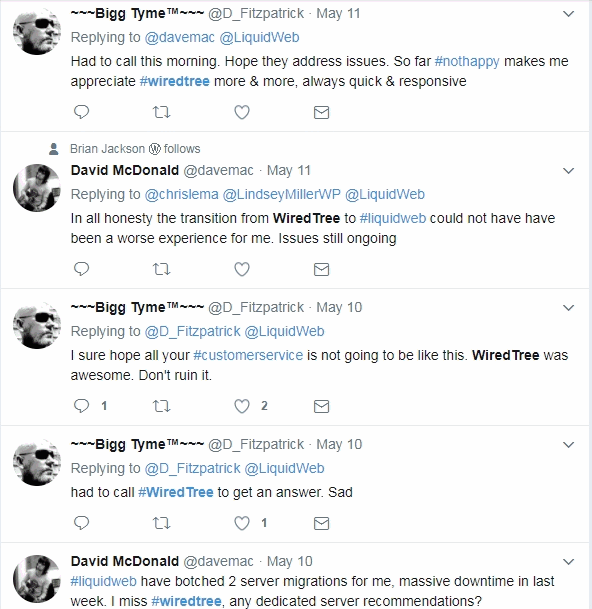 I started using a new service to measure uptime and a separate service for server response times. I’m very happy with them as their accuracy is alot better. Uptime really hasn’t changed much for all of them.

The best balanced server response times across the United States are for the hosts: Host Winds, Hostgator, Dreamhost and Arvixe. This is milliseconds we are talking about though, so there is not much of a difference.

With the new service (BitCatcha) I’m able to monitor the server response times from multiple points around the globe. Although in this chart I only report the United States East Coast and West Coast. I may update the chart again soon to include all the global points. Until then I plan to release the web hosting comparison charts for Europe & UK based web hosting companies and India.

PS Remember the Drag & Drop Table at the bottom can be used to compare hosts 1 vs 1.

PSS I’ll update the written part below the Drag and Drop Table soon.

After the chart I like to do a side-by-side comparison explanation of why one website hosting service is prioritized in the chart over the other:

It’s a pretty big list. Do you want to see these hosts 1 vs 1? Then select the company to see the side by side comparisons and alternatives:

(the color of the button doesn’t mean anything)

Hostmonster stays at the top with InMotion being added to the web hosting comparison chart as of 1/28/2016. Hostmonster offers more unlimited of everything and still during the Dec 26, 2015 – Jan 24, 2016 monitoring period still reports a 100% uptime of the 6389(now increased) known IPs.

%99.9 uptime reported for InMotion are perfectly acceptable numbers in the web hosting industry and they server response time is the fastest on the entire chart. InMotion offers many educational resources and does a very good job of responding to support across all of their platforms indicating that they are very beginner-friendly and aim to please.

With all this said it really comes down to your needs? If you want to build and manage many sites then Hostmonster has the base all-inclusive package for you. If you want blazing fast speed and just a few sites then go with InMotion. You could get more sites in the Power plan for $1.40 extra a month but as I have said before this chart is based on all the entry level hosting packages so the baseline has to be set somewhere.

2 websites per account, $250 in advertising credits, far more known IPs to justify a correct uptime and a faster server response time of 141ms compared to that of 272ms from Hostwinds, makes InMotion pull ahead.

Hostwinds is only a few years old (around 7 years now) so that makes them the new kid on the block. They still have to prove themselves but they have been bringing it from the very beginning. Free migration, server response time, unlimited disk space and unlimited emails. All of these features are the major areas that put them ahead of Bluehost.

UPDATE6/30/2017 Liquid Web recently acquired WiredTree which was an awesome host. Liquid Web has been an absolutely f’ing nightmare. The migration took over a month and was a huge cluster &$@#. With any competent host a migration will take a single day and propagation lasts 72 hours. Their Heroic Support is anything but! I’ve been on hold over 20 minutes and just hung up. I’ve had tickets sitting in their ticket system for 2 days that go completely ignored. STAY AWAY FROM LIQUID WEB. If your site goes down they simply do not care like they use to in the past.

Bluehost does out-compete Liquid Web though simply because during the monitored dates they managed to keep nearly 100% uptime for 23485 known IPs only 13 reported outages. Bluehost also offers more disk space, a great price and their speed is really good.

. Hostgator use to have excellent support but it seems like many customers have been posting more and more lately about how their support has gone down the tubes over the past years. Everyone has their opinions and I’m sure Hostgator’s support team is atleast trained to deal with the most common issues so if find you comfort in that go with them, Anyone could easily have better support than Liquid Web.

Siteground beats out iPage by offering free migration and a better uptime. iPage does offer unlimited disk space and websites on one account but not offering cPanel is a huge downer. iPage is also rebuilding their customer satisfaction based on the reviews I have read whereas Siteground doesn’t have much of an issue in that area.

iPage offers more unlimited in several areas than Godaddy does, along with better performance.

Despite Godaddy not offering as much as Dreamhost atleast they do not charge extra for 24/7 phone support. Godaddy’s support is also pretty good, especially on the common issues.

Dreamhost reported better performance. Although Dreamhost has some nightmarish customer complaints it seems to be nothing compared to the problems people report that they have with 1&1. I guess you really do get what you pay for in this case.

Arvixe has really dropped the ball on this one because they would have been several ranks higher if they simply managed to keep their clients website online.. you know, what they are paid to do. A 92.37% uptime is beyond unacceptable and inexcusable.

How does web hosting work?

(A must watch for brick & mortar small businesses)

Do you have an opinion on any of these hosts?

Also if you have any questions about anything that isn’t in the comparison chart then let me know by leaving a comment.

Now stop reading this stuff, pick a host and build your site!

Do you have a question?